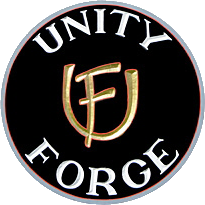 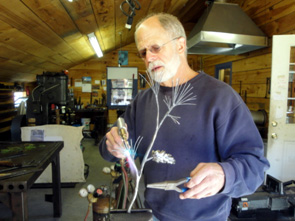 Steve Murdock grew up on a farm in Unity, Maine creating with whatever was at hand, but with a special interest in metal. He left to study Art in upstate New York where metal soon became his medium of choice. There he met Chia Rogers, a Theatre Arts major who admired his expressive metal work along with his blonde mane and brown bomber jacket. They fell I love, married, and welcomed two amazing sons, Eli and Noah into their lives.

Over the next 30-plus years Steve worked as carpenter, logger, electronics technician, and, ultimately, Associate Professor in the Physical Education department of the United States Naval Academy while pursuing his passion for competitive weightlifting. While living in Annapolis surrounded by historic metal work, Steve became intrigued by blacksmithing. He took an introductory class at the Central Maryland Blacksmithing Guild and soon built a small forge in the back yard, continuing his metal working education at the Ozark School of Blacksmithing, John C. Campbell Folk School, and Haystack Mountain School of Crafts as time allowed. Steve was privileged to serve as apprentice to Baltimore artist Chris Gavin, owner of Mandala Creations in Metal, in 2003-2004. 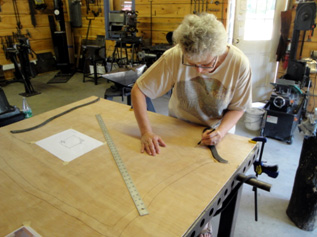 For three decades, Chia worked as a baker, early childhood instructor, architectural project manager and nonprofit program coordinator while pursuing her passion for lifelong learning. She also warmed more than a few benches in her role as wrestling mom. She enjoys that Steve is coming full circle in his desire to create objects of beauty with fire and enthusiastically builds on their mutual love of metal’s artistic potential.

Always intending to return to his hometown, Steve took an early retirement in 2004 and Chia closed her consulting practice. They moved into the farmhouse with Steve’s spritely mother, Beverly while building their new home and forge, occupying both in the winter of 2004-2005.

Steve received his Bachelor of Fine Arts from Ithaca College. He teaches Blacksmithing at Colby College’s Colby-Hume Center in Sidney, Maine for their January Program. Chia received her professional Bachelor of Architecture degree from Hampton University. She continues to build her small business management skills and is a recent graduate of New Ventures Entrepreneurship Training business planning course. She uses her design background to work with Steve in developing creative projects and is presently retooling her computer-aided design and drafting skills in anticipation of providing related services to architectural and landscape design professionals commissioning metal works.